Is it safe to Microwave food ? 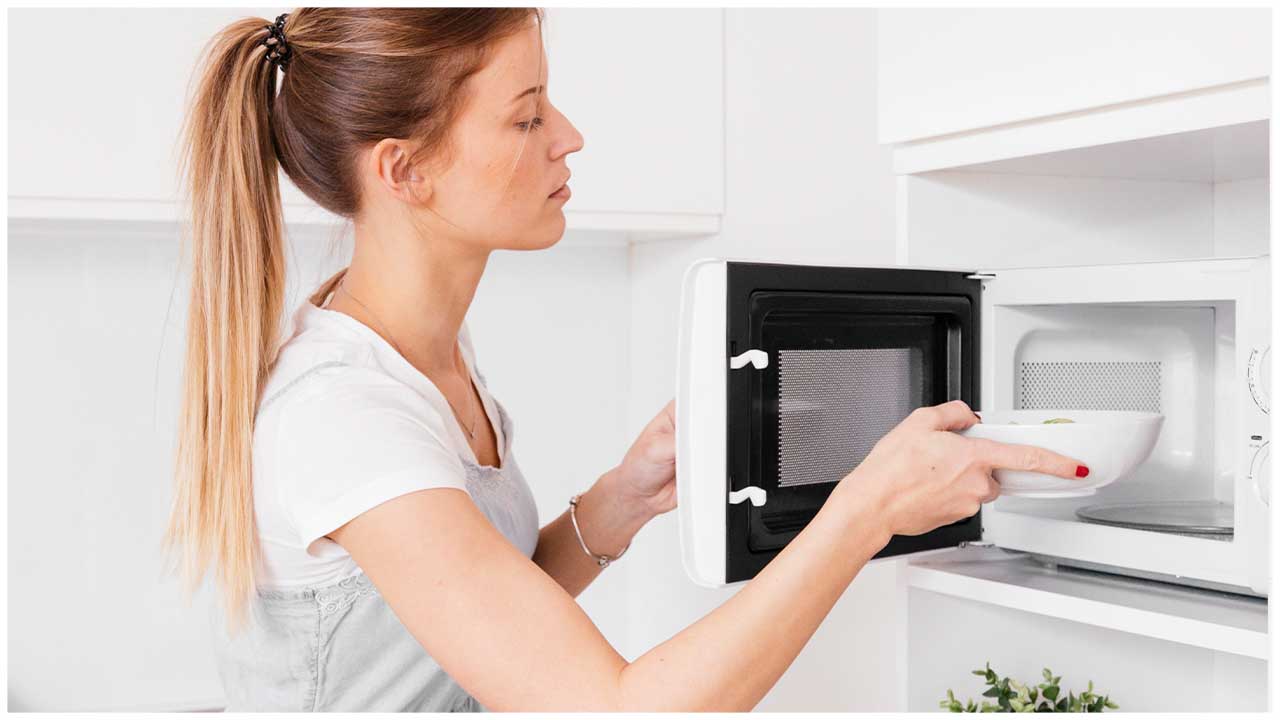 ▴ Is it safe to Microwave food ?

There’s nothing risky about microwave radiation – but there is about heating up plastic.- A research by Jessica Brown to have a clear picture

Despite being a kitchen workhorse for decades, few household items have been more divisive than the microwave. It’s hailed as a lifesaver for those who can’t, or won’t, cook, and portrayed by some chefs as singlehandedly dragging the art of cooking into the gutter.

But another debate lies beyond the culinary disputes – when is microwave cooking bad for you?

When used correctly, there’s nothing to worry about in terms of microwave radiation, according to the World Health Organization. But other concerns are less clear – including whether microwaving food causes nutrient loss, or whether heating food in plastic can trigger hormone disruption.

Some research has shown that vegetables lose some of their nutritional value in the microwave.

For example, microwaving has been found to remove 97% of the flavonoids – plant compounds with anti-inflammatory benefits – in broccoli. That’s third more damage than done by boiling. The secret tricks in our microwave meals

Is it safe to reheat takeaways?

The hidden risks of cooking your food
However, one 2019 study looking at the nutrient loss of broccoli in the microwave pointed out that previous studies varied the cooking time, temperature, and whether or not the broccoli was in the water. It found that shorter cooking times (they microwaved the broccoli for one minute) didn’t compromise nutritional content. Steaming and microwaving could even increase the content of most flavonoids, which are compounds linked to a reduced risk of heart disease. “Under the cooking conditions used in this study, microwaving appeared to be a better way to preserve flavonoids than steaming,” the researchers wrote.

Yet they also found that microwaving with too much water (such as the amount you’d use to boil) caused a drop in flavonoids.

Lead researcher Xianli Wu, a scientist at the Beltsville Human Nutrition Research Center at the US Department of Agriculture, says there isn’t one agreed mechanism to explain why microwaving could increase flavonoid content. It could be that microwaving makes flavonoids easier to measure – perhaps by softening the plant tissue, making them easier to extract – rather than increasing their amount

But there’s no straightforward answer as to whether microwaving vegetables will retain more nutrients than any other method. That’s because each food is different in terms of the texture and nutrients they contain, according to Wu.

In another study, researchers compared the content of phenolics (compounds associated with various health benefits) of various vegetables after being boiled, steamed, and microwaved. Microwaving and steaming caused a loss in phenolic content in squash, peas, and leeks, but not in spinach, peppers, broccoli, or green beans. The researchers also tested for antioxidant activity.

For both measures, vegetables fared better in the microwave compared to being boiled.

“Moderate heat treatment might have been a useful tool in improving the health properties of some vegetables,” the researchers write.

We often microwave foods in plastic containers and wrapping, but some scientists warn of the risk of ingesting phthalates. When exposed to heat, these plastic additives can break down and leach into food.

“Some plastic isn’t designed for microwaves because it has polymers inside to make it soft and flexible, which melt at a lower temperature and may leach out during the microwave process if it goes beyond 100C (212F),” says Jumping Tang, professor of food engineering at Washington State University.

In a 2011 study, researchers purchased more than 400 plastic containers designed to contain food and found that the majority leaked chemicals that disrupt hormones.

Phthalates are one of the most commonly used plasticizers, added to make plastic more flexible and often found in takeaway containers, plastic wrap, and water bottles. They have been found to disrupt hormones and our metabolic system. In children, phthalates can increase blood pressure and insulin resistance, which can increase the risk of metabolic disorders such as diabetes and hypertension. Exposure also has been linked to fertility issues, asthma, and ADHD.

Phthalates are also potential disrupters of thyroid hormones, says Leonardo Trasande, professor of environmental medicine and population health at NYU School of Medicine in New York. Among other things, these hormones are crucial for babies’ brain development during pregnancy.

Bisphenol (BPA) is also commonly used in plastic products, and studies have suggested it may also disrupt hormones. But research is limited, compared to the number of studies looking at phthalates.

Phthalates are everywhere – even in toys and body lotions – and it’s still unclear just how much damage they do. But most experts agree that heating plastic with phthalates can increase exposure.

“Microwaving mobilizes contaminants,” says Rolf Halden, professor, and director of the Biodesign Center for Environmental Health Engineering at Arizona State University. “This process is used in laboratories to extract pollutants from samples, before chemical analysis.”

And the potential risks don’t necessarily increase with how often an individual microwaves food in plastic containers, Trasande argues – as the relationship is non-linear between the amount of chemical exposure and risk of hormone disruption.

“The old pedagogy was that the dose mediated poison. Now we understand from multiple studies that low-level exposures are where the greatest component of effects happens, so there’s no safe level of exposure,” Trasande says.

It’s important to remember that, when heating food in a plastic container, exposure also can happen with plastic that doesn’t touch the food, such as a lid.

“Water rises like steam from the food and then condenses on the underside of the lid, and the extracted chemicals from the lid then fall into your food, contained in the condensation droplets,” Halden says.

he best ways to minimize risk are to use other microwave-safe materials than plastic, such as ceramic. If you do use plastic containers, avoid any that are losing their shape, since old and damaged containers are more likely to leach chemicals. You can also check your container’s universal recycling symbol, often on the bottom of a product – those with a number 3, and the letters “V” or “PVC” include phthalates.

Even if you avoid plastics, there are other potential risks of heating food in the microwave – including uneven heating, and the high temperatures used.

First, consider using microwaves to reheat, rather than cook, food, as it may cook unevenly. “Depending on the portion of food that’s heated, there will be some parts that are hotter than others,” says Francisco Diez-Gonzalez, professor of food safety at the University of Georgia.

“Temperatures will be different in a cross-section of the food. It’s hard to achieve a completely uniform temperature, especially when talking about raw foods.”

But it’s important to note that reheating food comes with risks, too. Food must be heated until it is 82C (176F) throughout to kill any harmful bacteria – and because bacteria can still grow each time food cools back down, you shouldn’t reheat a meal more than once.

The high temperatures of the microwave may also pose some risk. Generally speaking, higher temperatures aren’t a problem, but there is some research suggesting a risk linked to cooking some starchy foods in the microwave, including cereals and root vegetables.

When Betty Schwartz, professor of nutritional sciences at the Hebrew University of Jerusalem, saw her students heating jacket potatoes in the microwave on their lunch breaks, she noticed small crystals inside their potatoes.

When she analyzed them, she found they were high in the chemical acrylamide, which can be a natural by-product of cooking. Schwartz asked her students to boil their potatoes instead and found that this didn’t create acrylamide, which she says forms in higher temperatures in the microwave.

This is a concern because animal studies have shown that acrylamide acts as a carcinogen. After all, it interferes with the cell’s DNA, but evidence in humans is limited. There is some research to suggest that microwaves are more favorable to the growth of acrylamide than other methods of cooking.

“At 100C (212F), there’s enough energy to alter the automatic joints between molecules to produce a molecule with much higher energy, which can react with DNA, which induces mutations," says Schwartz. "When you have many mutations it can produce cancer.” Animals studies have shown this to be the case with acrylamides.

One way around this is to soak the potatoes in water before putting them in the microwave.

As for the radiation in microwaves, it is completely harmless. Microwaves use low-frequency electromagnetic radiation – the same kind used in lightbulbs and radios. When you put food inside a microwave, it absorbs these microwaves, which makes water molecules in the food vibrate, causing friction that heats the food.

Humans absorb electromagnetic waves, too. But microwave ovens produce relatively low-frequency waves and they are contained inside the microwave. Even if that weren’t the case, the waves are harmless, says Tang. (Of course, the heat in a microwave isn't harmless — so you should never put, say, a living creature inside of a microwave).

“If you’re eating crops grown from sunlight, you shouldn’t be concerned about food from a microwave.”

Unlike X-rays, microwaves don’t use ionizing radiation, which means they don’t carry enough energy to detach electrons from atoms.

“You have to break chemical bonds to damage DNA. This is the chief way radiation kills – it mutates cells and causes cancer,” says Timothy Jorgensen, associate professor of radiation medicine at Georgetown University’s medical center.

Concerns about microwave radiation were largely settled in the years after the microwave oven was first invented, Jorgenson says.

In particular, a lot of research was carried out by scientists at the Army Natick Research and Development Laboratories in Massachusetts, US, around the safety of microwaves, which went a long way to allaying concerns.

When it comes to cooking food in the microwave, there’s a lot to consider. Microwaves have long been deemed a safe kitchen appliance – but that comes with caveats, according to research. And in particular, experts are still raising concerns about how the plastic packaging we use in the microwave can disrupt our hormones, and, subsequently, affect our health.