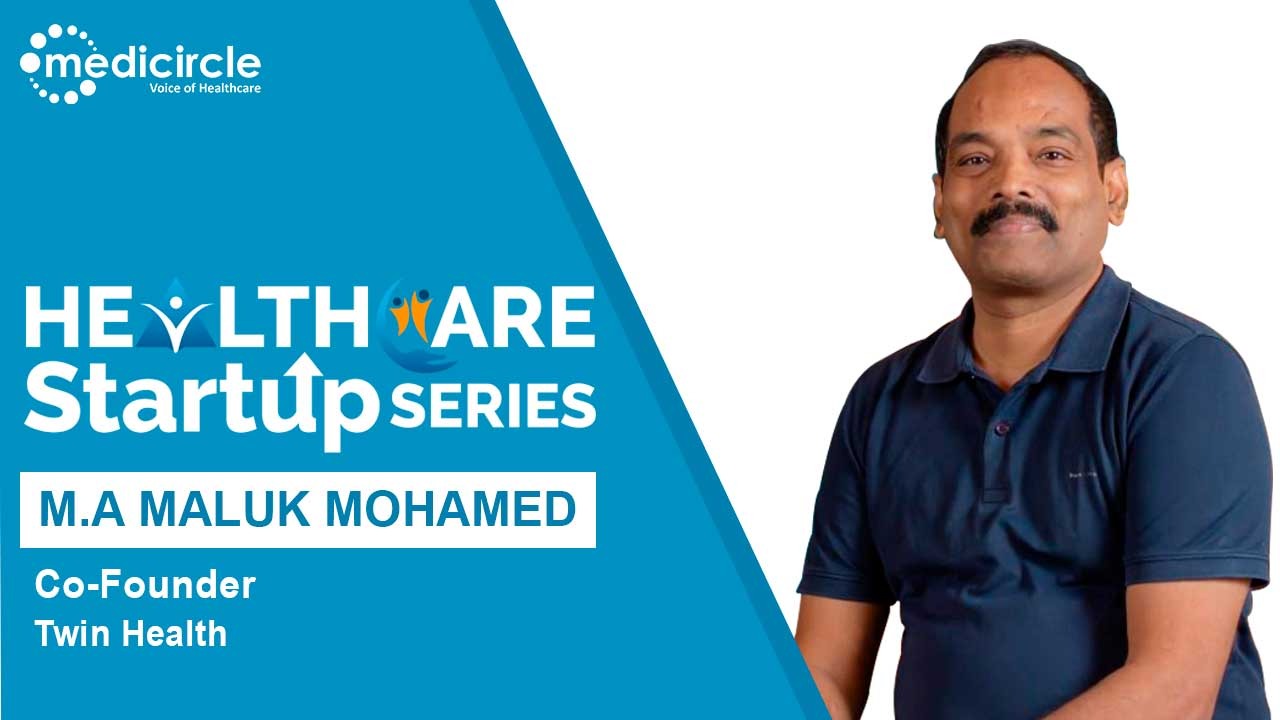 Read to know from M.A.Maluk Mohamed, co-founder of Twin Health, how he and his team made diabetes reversible solutions possible.

Would you believe that more Indians die due to diabetes than smoking? Every year almost 230,000 Indians die due to smoking whereas 254,500 die due to diabetes. Diabetes is a bigger problem in India, yet it gathers the least coverage. On the other hand smoking, drinking and drug usage garner more attention. An approximate 69.9 million Indians will have diabetes by 2025 and 80 million by 2030, making it a grave medical emergency.

M.A.Maluk Mohamed is the co-founder of Twin Health. Their venture is the pioneer of a precision health platform, used by doctors to normalise blood sugar, stop medicines, and safely reverse diabetes and chronic diseases. M.A. Maluk has completed his Master’s from the NIT Tiruchirappalli and completed his Ph.D. from IIT Madras.

M.A.Maluk Mohamed begins, “It has been an interesting journey since we began in 2018. We wanted to do something in the field of healthcare. For this, we talked to eminent doctors about the direction in which we should venture. All doctors had the same answer - diabetes. The reason for this is that diabetes and its complications are the root cause of many deaths. The unawareness regarding this is even greater.”

“The community at large has agreed on this. A person turns 40 and just accepts his diabetic condition. We wanted to dig deeper and understand why when medical science advancement is going through the roof is diabetes still a life-long disease. We saw the claims of reversing diabetes but that was through the Ketogenic diet. The same research has said that dietary programs cannot change sugar at the expense of other conditions.”

“So we dug deeper to find out a normal solution. So when we engineers talked to multiple doctors we found out that diabetes is not a disease but a condition, a symptom. The medicines administered by the doctors work towards removing the sugar from the blood. They wouldn’t change the actual symptom which is the disruptive metabolism. Doctors are aware of this but still don’t change it. As metabolism is 1000 plus biochemical reactions that take place in the human body at every instance of time.”

“This is where we developed the Your Whole Body Digital Twin, which is the first of its kind in the world. It is a patent technology that can not only reverse diabetes but also solve the root cause of it. Our focus is not to control sugar or managing diabetes. When we solve the root cause, a gambit of change happens in the body. So we have stopped calling ourselves a diabetes reversible company. We are a chronic metabolic disease reversible company.”

“We are able to affect their hypertension, their cholesterol and their BMI. There are studies that focus on how weight loss helps in normalising sugar levels. We have proved that that isn’t true. All our work has been scientifically published as well. I’m excited to say that the invention of Whole Body Digital Twin has made it possible to offer a revolutionary solution.”

“It is the first of its kind where it can normalise blood sugar and optimise health parameters. It looks at health holistically. This has helped us make a revolution in the world. With the  Whole Body Digital Twin, we can make the person happy and healthy.”

Mohamed says, “We are the first company in the world that can reverse diabetes by healing the damaged metabolism. What we offer is not a dieting program but a healing programme. Our USP is our product Whole Body Digital Twin which is a scientifically proven technology that is proven to reverse diabetes and optimise other metabolic conditions. Our reverse rates stand at the north of 90%. We were able to stop for all the members in RCT, including insulin, in 90 days of time.”

“All our work has been published in the scientific community. We are proud to share that we were able to present to the American Diabetes Association, the organisation that creates the protocol. We have over 25 publications in high-impact journals under our belt. We are also the first company in the world that we're able to prove that micro-vascular complications can be reversed. We were able to prove that damage to the eyes (retinopathy), damage to the kidney (nephropathy) and neuropathy can be reversed.”

Mohamed explains, “A healthcare solution can only be proven through a randomised control trial. Once the solution has been proven the doctors can start administering it to the patients. We have partnered with more than 300 doctors across 12 cities. This is a treatment offered by doctors. Even the American Diabetes Association has come out with a statement that remission is possible. We are extremely happy that what we discovered 3 years back is now being covered under ADA’s guidelines.”

Mohamed says, “We are open to partnering with all diabetologists and endocrinologists. Evey top-class doctor has embraced our thing and is happy to offer it. Our technology makes the doctor super powerful. With the technology, the doctors can offer position treatment.”

“Everyone gets a coach to understand the process. Members are all connected with the app that tells them what to do. The work of the care team (doctors and coach) is to provide the human touch to make the member comfortable with the technology. The primary doctor gives the treatment the platform recommends and reviews the patient data periodically. Whereas the internal doctor is there to handle the symptoms and connect with the primary doctor.”

“So there is a care team that is inclusive of the technology. Even the member gets the app. The mobile device is the interface to the whole Whole Body Digital Twin. The Digital Twin actually resides in the cloud. It is done by putting the basic sensors in the patient's body, their blood is drawn periodically and causal data is collected from the members. This is how we create a digital twin of the user that can precisely understand his body’s condition. ”

“The member's app is the interface to the whole thing. If I ask someone how they are they will not be able to tell precisely how their body is. But your digital twin will be able to tell it. So the doctor and member both get the app. Both of them talk to the digital twin and it is this twin that offers the solution.”

Twin Health vs the traditional methods of diabetes treatment

Mohamed explains, “Doctors know that the insulin produced by beta cells is not properly utilised, acted upon, or secreted. They also know that as the treatment proceeds the beta cells decline. So doctors work towards ensuring how to postpone the additional medicines. In this treatment, it starts with one medicine and then keeps on adding more medicines, till it reaches the stage of using insulin.”

“The doctors are primarily focused on how to stretch this period before they have to administer insulin. In our treatment though the process is completely opposite. Our treatment enables the regeneration of beta cells. The insulin process becomes normal as we are tackling the root cause of the problem. Another thing our platform does is to enable the doctor to see the health of the patient on the platform. If anything unique happens in the patient’s body then the doctor gets alerted. Not just one doctor but the entire team gets alerted and they can start working on it immediately.”

“The platform not only helps reclaim the metabolism but also helps in monitoring the body. The platform has the ability to monitor multiple diseases. This technology optimises the understanding of the body’s behaviour. It is also capable of giving personalised solutions to every problem.”

Mohamed states, “We have raised $155 million dollars in our Series C round. We had disclosed that we had raised $140 million but later some high-profile people wanted to invest in us. So far we have raised $198.5 million. Our goal is to grow our business in both India and the USA. We recently launched our products in the US. We are accelerating our growth aggressively. We are available in 12 Indian cities but want to be available pan-India. We are present in the tier 1 cities and would soon expand into tier2 and tier 3 cities.”

“We are excited about the future and are planning to expand the technology in a big way. There are many innovations that are taking place within the company. What we did 3 years back, where we filed the patent was exciting too. But now we are evolving in a big way. So the focus now is to make our tech superior and make it available across the country."

He says, “The way doctors are embracing technology is amazing. They are also cautious before embracing the technology. This makes them check the product's scientific validity, its data and whether it is right for the patients. That trust comes from scientific evidence that we can offer. We have an amazing advisory board made of national and international members that helps us deliver right.”

He advises, “Budding entrepreneurs are really smart. Without smartness and focus, no one can claim themselves an entrepreneur. It would be a win-win situation for all to support the next generation. Also, all the innovation is ultimately done for them. The goal is to make people’s life happy, comfortable and convenient.”