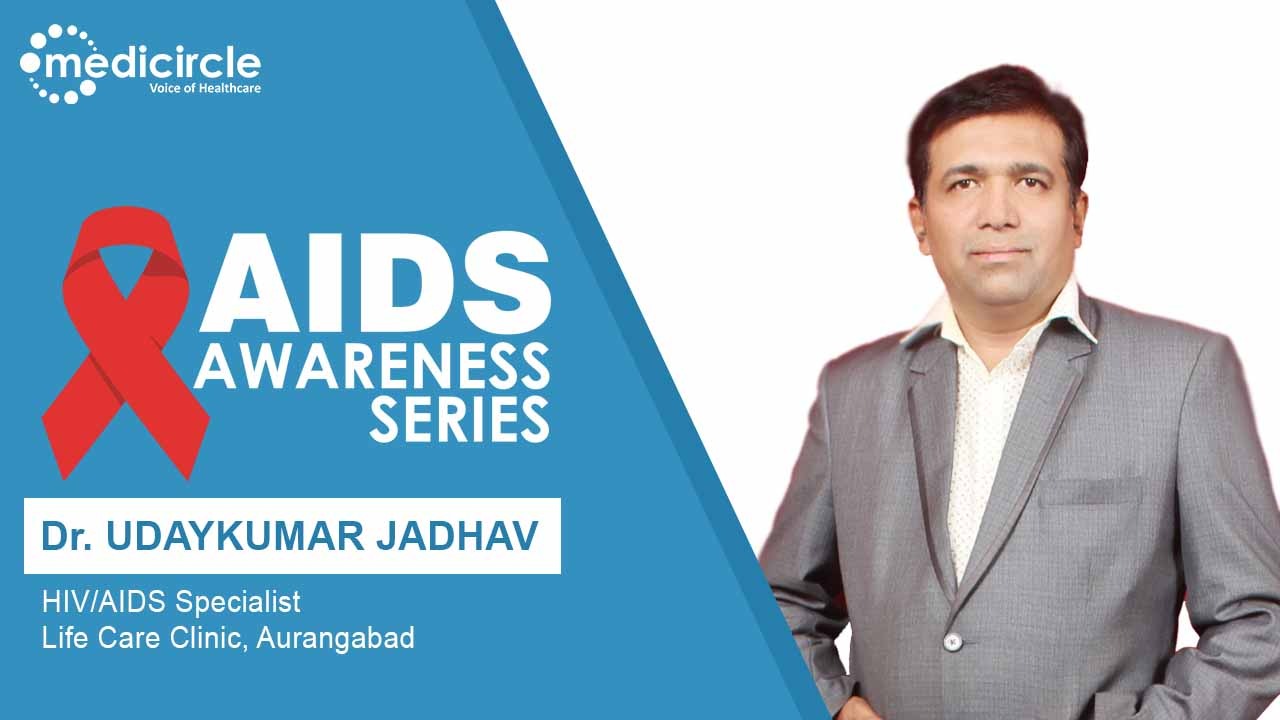 India has the third-largest HIV epidemic with 2.35 million people living with HIV. Of this 1.345 million are receiving ART. There were 69,220 new HIV infections and 58,960 AIDS-related deaths reported in India in 2019. India’s HIV epidemic is driven by sexual transmission. The three states with the highest HIV prevalence, Manipur, Mizoram, and Nagaland, are in the east of the country. India’s HIV epidemic is slowing down. Between 2010 and 2017 new infections declined by 27% and AIDS-related deaths more than halved, falling by 56%. We at Medicircle are conducting interviews with some prominent specialists/ doctors to be aware of this problem of prostate cancer which will help you deal with it.

Dr. Uday Kumar Jadhav is an Infectious disease consultant specialized in HIV and AIDS management. He completed MBBS from Mahatma Gandhi Mission’s Medical College, Aurangabad and completed his Post Graduate Diploma in Clinical Research and worked in several international clinical trials of ART in the pipeline. He is Practicing for the last 14 years. He Manages OPD as well as IPD critical patients.

Dr. Uday says, “AIDS is acquired immune deficiency syndrome. It is a group of diseases that includes infectious diseases, pneumonia, scabies, tuberculosis, cancer, osteoporosis. It affects multiple organs of the body. AIDS is caused by HIV that gradually lowers immunity over a period of time. With this immunocompromised body, the patient gets susceptible to other common infections. Later on, HIV may develop into AIDS if not treated on time.”

Dr. Uday mentions, “AIDS cannot transmit through saliva. AIDS can only transmit through 3 ways – Unprotected sex, blood transfusion, sharing needles, from mother to baby. It cannot be spread by shaking hands, hugging, sharing toilets, eating together, sweating etc. If an infected patient is having bleeding gums, bloody ulcers then there is a possibility of spreading through saliva. Government programs and awareness at every level have helped us a lot to come out of the AIDS epidemic. Now the growth rate of HIV in India has slowed down significantly.”

Dr. Uday explains, “HIV is communicable but AIDS is a non-communicable disease. Now we are using disposable syringes which get discarded after a single-use. Before blood transfusion, the donor’s blood is tested for HIV, if it's negative then only they do the transfusion. Before organ transplant, kidney transplant, or semen transplant, the donor’s blood is first tested for HIV. And after proper confirmation of the negative report, further processing is done.”

Everyone must get their HIV test done before marriage

“HIV can be easily controlled, you just need to be a little aware of precautions, treatments. We cannot tell that a person is having AIDS just by looking at him. Therefore, if anyone doubts/suspects, then he should get tested for HIV. The test is kept confidential. Everyone must get their HIV test done before marriage. If someone comes positive, then there are medicines that can control the disease and help lead a normal life. With newer advances in Science, there are treatments available that can help lead a normal life even if you are HIV positive.”

An inspiring message for people living with HIV

Dr. Uday concludes, “With early diagnosis and taking regular medicines (timely treatment), we can easily control the spread of HIV in different parts of the body. If we can control HIV in its early stage, it will not develop into fatal AIDS. Thus, life expectancy will not get affected by this and patients can live a normal life. There can be a bright life beyond HIV as well. You can live a healthy and happy life with HIV. You just need to take the medicine on time so that your CD4 count remains normal.”